My adoration for our local Sichuan restaurant Han Dynasty has been briefly detailed in some previous posts, but I haven't yet mentioned the dish that upon first bite made us fall in love with not just the restaurant, but with Sichuan cuisine as a whole - the dan dan noodles. A toothsome tangle of pasta bathed in a pool of fiery sauce topped with flavorful pork mince and coarsely cracked peppercorn, this scrumptious, scorching bowl has us coming back to Han with feverish devotion at least once a month. This recipe is my valiant effort to construct an acceptable simulacrum of the dan dan noodles at home, and although it certainly doesn't top Han's, it's a super tasty and satisfying bowl of food. Fair warning though, it's very spicy... so approach with caution! 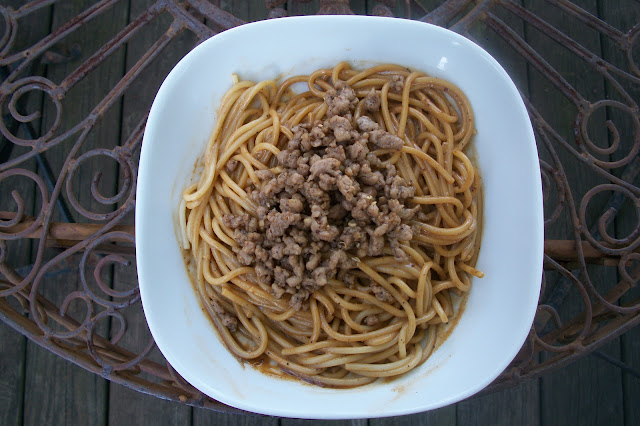 Recipe is a composite of a couple Fuschia Dunlop recipes in Land of Plenty, with some personal additions

Put water on to boil. Measure everything from the sesame paste to the peanut oil and place the stated amounts into each of the two bowls - you can either mix the ingredients together to form a sauce (as I like to do) or leave them in sitting in a state of heterogeneity (like the other household half prefers). While the pasta is boiling, heat a bit of peanut oil over medium-medium high in a wok and stir-fry the coarsely ground peppercorns for about 30 seconds before adding in the pork. As soon as it starts to separate, splash in the sherry and the soy and continue stir-frying, scraping the bottom, until the pork mince is entirely cooked and starting to get a little crispy. Drain, rinse, and drain the pasta again and then dole out between the two bowls, onto the sauce, and top with the pork mince (and sliced scallions, if using). You can either stir the noodles into the sauce at this point, or let everything meld together naturally as you eat your way to the bottom.