I suppose with a blog entitled "Zou Bisou Beef Stew", I had to deliver a beef stew recipe sooner or later! Voila, my Flemish beef stew, or carbonade à la flamande as it is otherwise known. When the winter winds start licking underneath the doors and rattling the window panes as they did yesterday, there are few comfort foods I enjoy cooking more than this dish of tender, savory chunks of chuck braised in a rich burgundy-brown gravy spiked with a spicy and complex abbey-style ale.

Important tips - do not scrimp on the beer, and, make sure to get an extra bottle or two to sip with the meal! I recommend Ommegang's Abbey Ale. Enjoy! 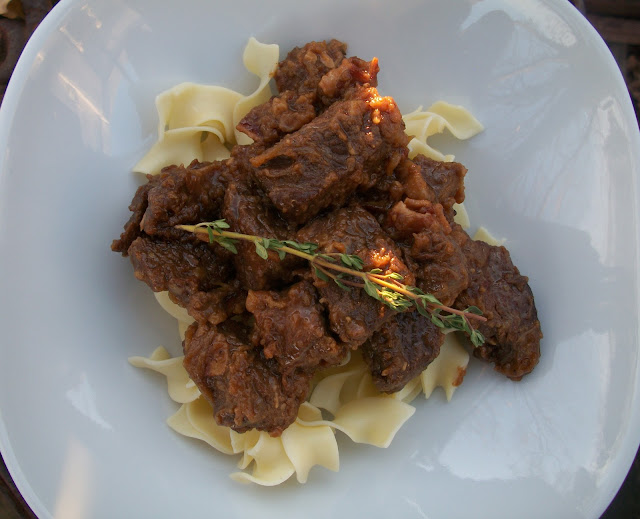 Note: this picture is of leftovers; there is significantly more gravy in the initial go-round! Flemish Beef Stew
Makes 3 servings

Heat oven to 325. Combine the flour, S&P and coriander in a large ziplock bag. Add the cubed meat and toss the bag around until the pieces are lightly floured; remove and shake off excess flour. Meanwhile, cook chopped bacon over medium in a dutch oven until fat has rendered. Remove bacon with a slotted spoon, and then working in batches, add the meat and brown on all sides, about 5 minutes total per batch, adding a touch of olive oil if needed between batches. Transfer the meat to a plate and set aside. Melt 2 tablespoons of butter and add the onions. Sprinkle 1 teaspoon of brown sugar and a pinch of salt over them and cook over medium-low heat, stirring occasionally, until caramelized, about 20-30 minutes. Add the garlic, increase the heat back to medium and cook for another few minutes. Add half of the beer; cook, scraping at the bottom of the pot with a wooden spoon, until the beer has slightly reduced, about 3 minutes. Return beef and any juices to the pot with the remaining beer, stock, the rest of the sugar, vinegar, bacon, bound herbs, paprika and a good pinch of salt and pepper. Bring to a boil, then remove from heat, place the mustard-slathered bread on top of the stew and cover.  Braise covered in the oven for at least 2 1/2 hours, preferably 3. I usually stir half of the bread into the stew, depending on the thickness of the gravy, and then toss the other half (or let the cats lick it for a while).

You could also crockpot this sumbitch, if you so prefer.

Buttered egg noodles tossed with salt, pepper, and minced parsley is my favorite foundation for the stew, but pick your favorite starch to pair - just make sure that you have some extra crusty bread on hand as well!